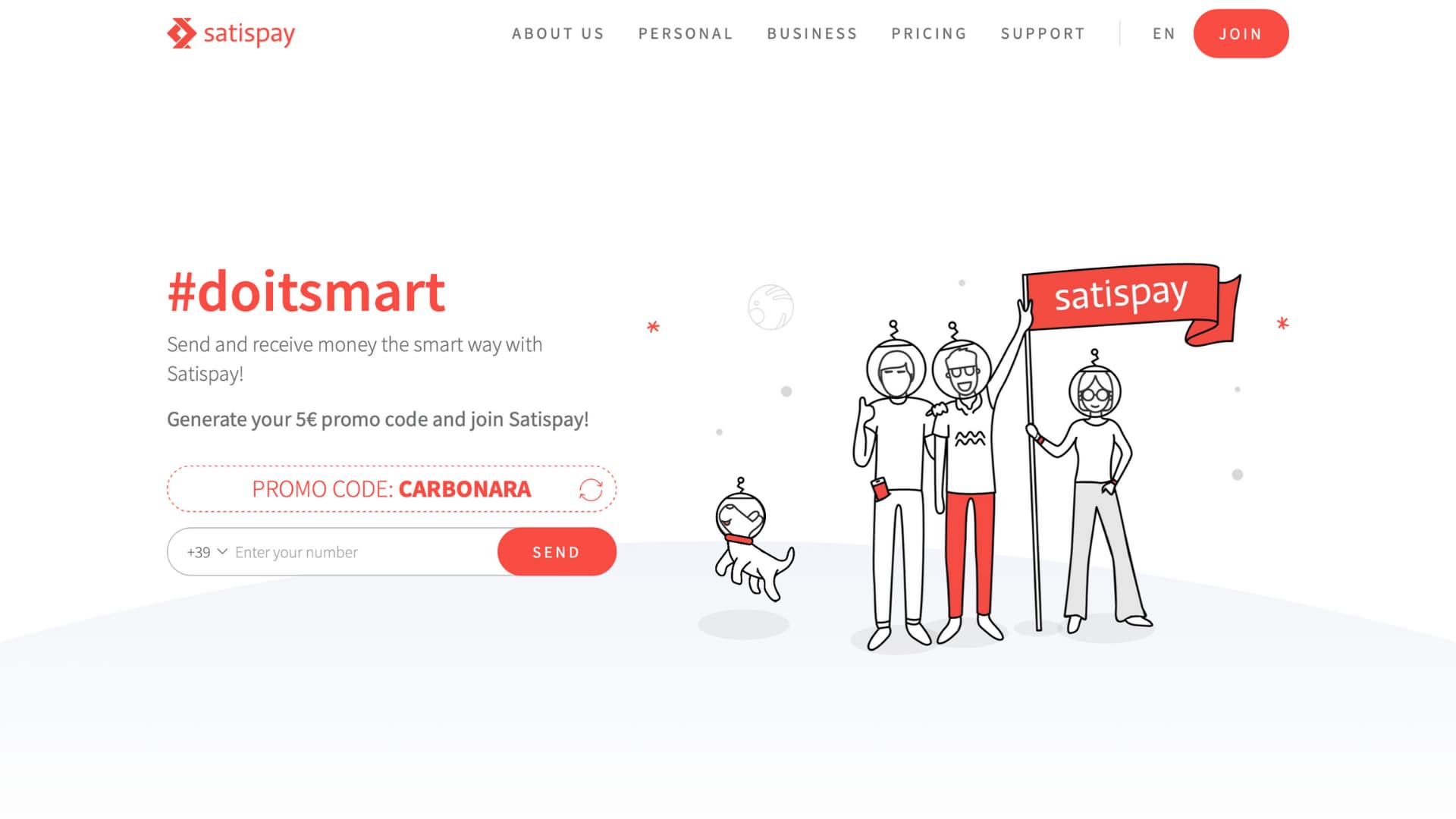 The Italian payment app Satispay, in addition to having revolutionized the world of payments, has closed millionaire funding rounds and has expanded rapidly internationally. In 2020 it was included for the second time in the CB Insight section of the 250 fastest growing globally Fintech companies.

This platform offers the possibility to anyone with a bank account, to exchange money with the contacts in his/her mobile phone book and to pay at the affiliated points of sale, directly with his/her smartphone. The Italian payment app managed to make its way into a country where cash seemed essential.

But when was Satispay born? How does it work?

Satispay S.p.A. was established in January 2013 in Turin and in 2015 launched the mobile application for digital payments and online money transfers. It is currently the best known and widespread payment app in Italy and Europe.

The far-sighted idea of ​​ the Italian payment app came from three young guys from Cuneo, who, at the end of 2012, left their job to start working on this project. The idea does solve the Italian problem of using cash. In fact, the three founders noted that many service providers were not yet equipped with POS terminals or in general refused payments with debit and credit cards, especially for small amounts; therefore, digital payments could be the solution.

Saitispay founders’ team is made of:

Alberto Dalmasso, CEO, graduated in International Economics, University of Turin, and later got an MBA. From 2010 to 2013 he worked in Marketing and Business Development.

Dario Brignone, CTO, graduated in Information Technology and Network Systems, University of Turin. In the following years he worked as System Architect and Administrator, Consultant and Business Applications Coordinator, till founding Satispay.

Samuele Pinta, COO, graduated at the secondary technical school “G. Vallauri”, completing his Computer Science and Telecommunications studies. He immediately began working as General Manager in the Agribusiness and Renewable Energy industry, before setting up Satispay.

To start using Satispay, you need to download the app that meets everyone’s needs: it is available in Private (orange logo) and Business (gray logo) versions, for both Android and Apple mobiles.

Once the app has been downloaded, you need to create an account linked to your IBAN, and so to your bank account, from which you can transfer to your Satispay account a certain amount of money, corresponding to the weekly budget that you plan to use for sending money to your friends and for payments at affiliated commercial establishments. At the end of the week, at midnight on Sunday, the weekly budget is re-set through a debit or a credit transaction from your current account.

As soon as the account is created, you set a weekly budget of 100 Euro which are transferred you’re your current account to Satispay. What happens next?

Services of the Italian payment app

The great success of the Italian payment app was certainly not fortuitous, in fact the app offers many easy-to-use services:

Furthermore, with the Italian payment app, you can save money by creating piggy banks within the app, where the Cashback will be credited or where a periodic amount set by us will be transferred.

To settle invoices, instead, we will find in the “Profile” section all the history of our receipts, which can also be downloaded.

Costs for individuals: all services of the Italian payment app are free, except for car or motorcycle license payments, money orders and pagoPa: these transactions cost 1 euro.

Costs for businesses: at physical stores, transactions equal to or lower than 10 euros are free, while 0.20 Euro are charged for higher transactions. E-commerce and social platforms pay 1 euro for transactions lower than or equal to 10 euro, and 1.2 Euro for higher ones. Finally, a 1% commission is charged on each individual transaction at vending machines.

To understand the success and importance of the Italian payment app we can just mention the figures reached in 2020: the Italian Fintech got 450,000 new users and 35,000 new affiliated businesses, reaching a total of 1.3 million active users in Italy and 130,000 merchants. Some important names such as KFC, Auchan, Carrefour, Esselunga, Mondadori and world-wide renowned technical partners such as Vtex and Docomo also chose Satispay.

The Italian Fintech Satispay already began to take its very first steps in the world of fundraising in 2013, closing an Angel Round of 420,000 Euro in the seed phase. In 2014 it closed a new round with 3LB Seed Capital Srl, for 700,000 Euro.

In 2015 Satispay began to raise millions, closing two Serie A rounds: the first in January, for a total of 5.5 million Euro; the second in September, for a total of 3 million Euro with Iccrea Banca and some executives and entrepreneurs operating in finance, internet, and telecommunications.

The Series B rounds obtained by Satispay brought the total fundraising up to 42 million Euro and increased the value of the company to over 100 million Euro.

In 2019 the negotiations for a Serie C round began, which, initially, was supposed to be 50 million Euro. In 2020 Satispay closed the round with a total of 93 million Euro: 25 million from the purchase of shares held by past investors, and 68 million capital increase by Tim Ventures (Tim’s Venture Capital fund), Jack Dorsey (founder of Twitter) through Fintech Square, Tencent (the holding company that owns, among many other things, WeChat) founded by the billionaire Ma Hueteng, and by Igt Lightstone (part of Lgt Capital Partners, the largest family private banking group).

This multimillion-dollar transaction brought the company’s valuation to 248 million Euro.

In 2020 Satispay started the negotiations for a new investing round of 50 million Euro, not yet concluded due to the impact of COVID 19. Among the various names that could participate in the transaction, we also find Mediaset, with a Media for Equity agreement through its Corporate Venture Capital Ad4Ventures. Now, however, it seems that Mediaset entered the Satispay capital only with a small stake through RTI (Italian Television Networks).

Facebook
LinkedIn
PrevPreviousBusiness lawyer on a legal design approach for startups
NextPrivacy Policy generators: the best 10 tools for your businessNext